Use this chart to determine the parts you need (PDF file): ➦Harley Davidson isolation flow chart

Isolators easily and properly connect the lighting from your trailer, sidecar, trike, etc. while removing the electrical load from the motorcycles factory wiring, fuses, relays, computers, and electronics. Proper isolation of electrical loads will help you to not void any factory warranty.

Our design is a modular daisy chain of a separate sub-harness, modules, and the Isolator. The advantage is that you can accommodate a 5 wire trailer, a 4 wire trailer, or swap sub-harnesses should you sell your current bike. All our electronics are made in the USA.

Sub-Harnesses
The sub-harness connects to your bike on one end and the Isolator on the other.
This makes the connection “Plug & Play” so you don’t have to splice.
There are 3 sub-harness versions used from the late ’90s until 2013:

Isolator
The isolator is the main component. And ours is made in the USA. Tennessee to be exact.
Ours are epoxy potted for weather resistance using Omron components (Omron is an OEM supplier to almost all the major automotive and motorcycle manufacturers).
We use the best component available for the job; in fact, Toyota uses the same component for power window switching.

Trailer Light Converter (5 to 4 module)
If your trailer is a 4 wire setup (has combined brake and turn signals), you will need this converter. 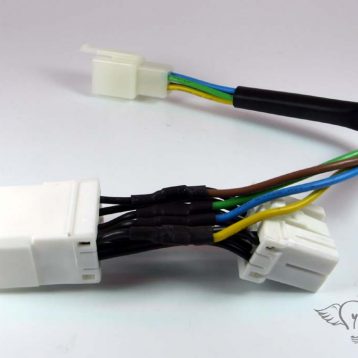